The Present and Future of Marth in Melee

Although Super Smash Bros. Melee has a dynamic and competitive meta, there are a few aspects of competitive play that many of its players take for granted: Fox is a good character, Ice Climbers vs. Peach will always be a brutal matchup and any character below 10th or so on the tier list doesn’t have a chance of winning a large international tournament.

For a long time, Marth was considered one of the game’s premier characters, with players like Ken and Azen practically having a guaranteed appearance in a major’s top eight or even grand finals. In early 2015, when PPMD won Apex 2015 playing mostly Marth, it was the first time a Marth won a Melee major since Azen won Viva La Smash in 2007, per Juggleguy. Afterwards, people wondered if a Marth renaissance would start again.

As we head into the summer of smash in 2016, Marth hasn’t won another major yet, but it doesn’t mean his time is over. Here are some notes to consider about everyone’s favorite tiara-wearing prince.

The best Marth players currently use him as a situational counterpick – and not as a dedicated main. 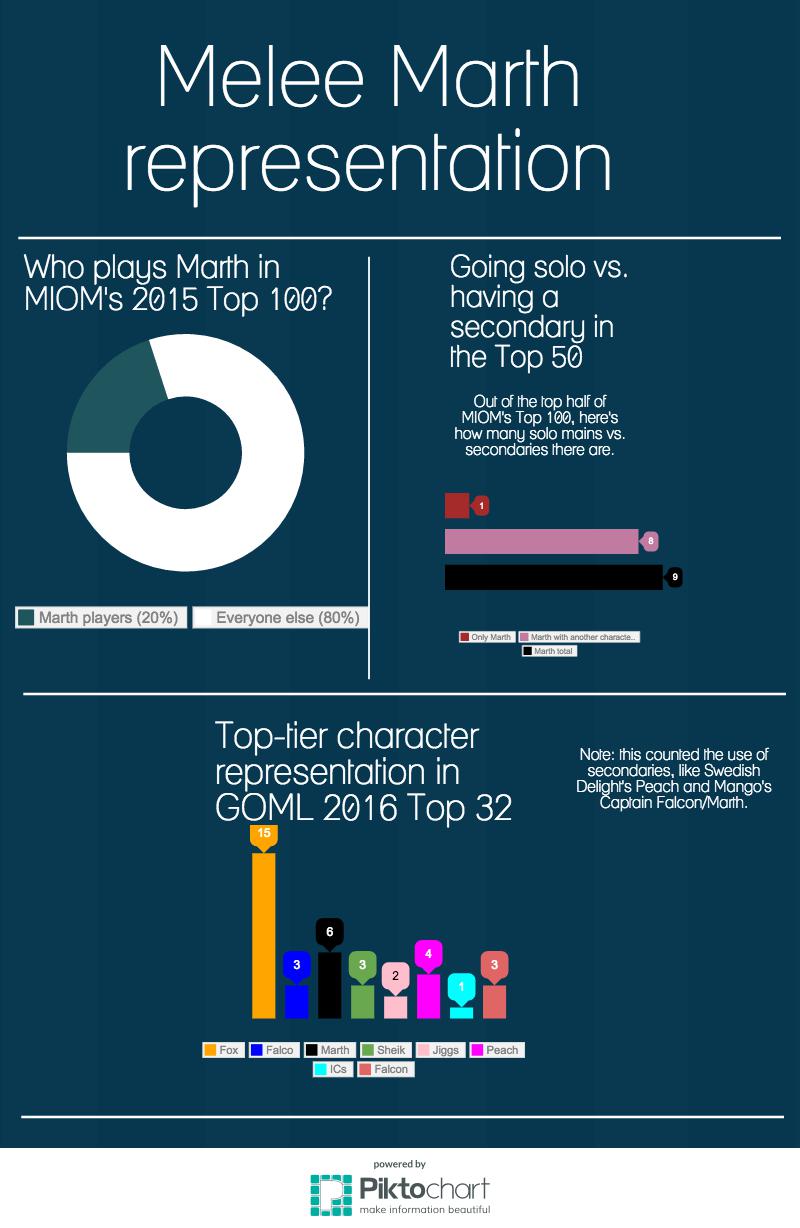 Although PPMD won Apex 2015 by going Marth through most of the tournament’s top-eight, this was mostly due to his opponents playing characters with perceived favorable matchups for Marth, with Leffen going Fox and Armada going Peach, before switching back to Fox. At the time, he was still a Falco player in most other matchups. In fact, before switching to Marth at Apex, PPMD tried playing Falco against PewPewU in Winners’ Quarters and used the bird to win an earlier set against S2J.

Similarly, Mew2King brings out Marth against Fox and Falco, while he only sometimes uses him against Peach and Marth, depending on his mood. Meanwhile, we’ve seen Mango pull out his Marth in bracket against space animals like Hax and Leffen, though this strategy currently has done a better job giving himself gfycat-worthy moments of greatness and “busterdom.”

Using Marth isn’t limited to the top echelon of players. Axe and Shroomed have played Marth in bracket before in order to avoid traditionally unfavorable matchups, like the Ice Climbers, for their mains. Colbol, who doesn’t like playing the Fox ditto or against Falco, now plays mostly Marth against these characters. DruggedFox also saw success against Mango at HTC Throwdown last year as Marth, though he hasn’t played Marth this year.

Though Marth as a character hasn’t won a tournament on his own, his relative success as a situational counterpick has clearly been valuable. Genesis, Pax Arena, Beat VI, Battle of the Five Gods, Pound 2016, Smash Summit 2, EGLX, DreamHack Austin and GOML all had Marth play at some point during their top eight phases.

All of this leaves Marth players in a weird position: where his use in a variety of matchups illustrates Marth’s incredible versatility as a counterpick, but his lack of solo success highlights consistency issues that come with playing the character. Does that mean it’s difficult to play only Marth at the top level?

The solo Marth mains are struggling.

If we count PewPewU’s use of Fox at GOML as something he’ll be using long-term, here’s how a few ranked dedicated and listed solo Marth mains from last year’s MIOM’s Top 100 fared this year in terms of major results and their losses.

Along with the massive amount of N/A’s, notice how this already small table doesn’t take into account players like reaper, ZoSo or Dart, who have seen limited exposure to a wider audience and are seen as regional heroes, although these players could also rise nationally by the end of the year. The table also excludes PewPewU, who might be using Fox for more matchups that he currently struggles with, like Captain Falcon.

None of this is to diminish their work and placements as competitors – the relative lack of dedicated representation to using only Marth in bracket shows how the data points are too few in 2016 to definitively have an opinion on if he’s falling off in the meta as a solo main. Then again, you could argue that this clearly illustrates consistency issues as a legitimate weakness deterring other players from dedicating themselves to playing Marth over a character like Fox.

However, as seen from above, Marth mains aren’t just losing in unfamiliar matchups (such as Samus or Yoshi), like popular convention might hold true. They’re losing their stronghold on a matchup they used to dominate.

20xx is approaching/Fox players are starting to beat Marth/FD isn’t a guaranteed win.

Fox players have adapted to what was formerly considered one of the hardest matchups in the game for them. Their reign on the metagame has gotten to the point where some Marth mains have actually stopped counterpicking to Final Destination. At Get On My Level 2016, The Moon opted to go to Yoshi’s Story against Leffen for his stage pick.

When I asked The Moon why he counterpicked there instead of FD, he responded that he wanted a smaller stage, but I also think part of why FD doesn’t feel so safe is because Fox players have leveled up there.

Unfortunately for Marth mains, this isn’t relegated to only the large, flat space allowing for laser camping. Fox players have figured out how to hit Marth back – and sometimes even harder. Take a look at the following match at how each player converts off one grab, both in terms of guaranteed follow-ups and additional hits from stage positioning.

PewPewU grabbed Ice only twice throughout the entire game, averaging 33 percent damage on Marth’s follow ups. Meanwhile, Ice grabbed PewPewU five times and had just above 65 percent for his average combo game, including two that led to death. Ice both outplayed PewPewU in the neutral and followed following up much harder in his combos on stage. Only a few missed edgeguards and high variance situations, like when Ice overextended his character off stage and got killed at an absurdly low percent, made the game look closer than it actually was.

You can tell the difference in production partially comes from PewPewU being relatively weak at the matchup on FD. But even assuming PewPewU as an outlier, just use common sense. What’s an easier way to get 36 or more percent on a character: grabbing them and hitting two following up airs/aerials afterwards or having to mix up between frame perfect pivot regrabbing and regular regrabbing to avoid getting shined on the first frame out of hitstun? Marth could still win the matchup on FD, but not every Marth is going to be Mew2King.

Also consider the head to head game record of Fox vs. Marth within the Top 30 on every stage over the last two years. Per TafoStats, an online database with data from Daniel “tafokints” Lee, Fox players in this group maintain a solid 70-68 record against Marth. The only Marth players within the Top 30 to hold a lead in the head to head are Mew2King (23-17) and The Moon (12-5).

Although part of the data set still needs to be updated and could be biased given the sheer number of Fox players there are near the late-bracket stage of tournaments, consider that if Marth was really as valuable of a counterpick against space animals as people say he is, the record would be in his favor – and Fox players would pick other characters against him.

Moreover, in addition to Fox players doing better on FD  than in the post, they’re also hindering Marth’s combo ability on other stages. Take a look at how Armada quickly escapes a would-be combo from PPMD below.

Yoshi’s Story used to be considered a strong stage for Marth a decade ago due to the platforms setting him up for easy tipper forward smashes, but the short stage and platforms are not lopsided for Marth any more, due to Fox players playing faster, being able to shield drop, having better DI, etc. One thing we could see more from Marth players are the reaction forward throw tech chases as a mixup from just throwing Fox up on a platform. However, even that has counterplay, with Fox being able to mix up teching options, aSDI’ing jab resets on missed techs and also being able to escape to ledge when cornered.

Marth players were given a glimmer of hope at Apex 2015. But with Fox players fighting back, a lack of data points with solo Marth mains at majors and his heavy use as a complementary character to cover weak matchups, it’s tough to say where his future lies for sure. Only time will tell if we’ll see another prince take the crown in the game of Melee thrones.

This site uses Akismet to reduce spam. Learn how your comment data is processed.